Gloucestershire is a beautiful rural county, rich in history and traditions.  It is steeped with many interesting ‘old world’ buildings, estates and iconic landscapes.  Major attractions are the limestone Cotswolds, the ancient Forest of Dean, the Stroud Valleys and the dominant river Vales that include the Thames, Severn and the Wye rivers.  It has been a popular ‘centre’ for the Romans and for the Anglo-Saxon Witan.  There were many settlers through the ages.  The two major hubs have been Cirencester and Gloucester.

The area was originally inhabited by Brythonic people (ancestors of the Welsh) and Celtic Dobunni.  It was eventually dominated by the Hwiccas, an Anglo-Saxon tribe, a dependency of the Mercian empire.  The Severn Vale with its lush meadows, half timbered buildings and abundance of wild fowl has attracted visitors from far and wide.  Cotswold stone villages are world renowned for their unique beauty.  Historically the Cotswolds became driven by the wool trade.  Stroud and the five valleys on the northern slopes of the river Frome was an industrial centre in the 18th and 19th centuries.  The cloth mills once crowded these valleys.  Industrial heritage can be traced back before the 14th century when water power had been in use even before the Norman Conquest.  Stroud’s cloth industry was at its peak between 1790 and 1830.  Such places naturally provide visitors of today with many recreational and sightseeing interests to pursue.

Perhaps one should start with the unique activities caused by the phenomenon of the ‘Severn Bore’ that periodically sends a flooding tidal wave up the river from the Bristol Channel.  On these occasions some individuals attempt to ‘ride’ it out on various vessels.

Some quaint customs include the ‘Cheese Rolling’ on Coopers Hill, the Tetbury Woolsack Races, the Eynesham Shirt Race, St. Briavels Bread & Cheese Scramble, Football in the river at Bourton-on-the-Water, Onion eating at the Newent Onion Fayre, Bibury Duck Race, the Marshfield Mummers on Boxing day and ‘Wassailing’ in various locations.  Morris dancing takes place in various parts of the county.  There are of course various horse fairs, markets and farming events that follow the wider traditions of the countryside.  Commoning of ancient meadows and woodlands is widely carried out in the County and village greens have considerable importance to the inhabitants of Gloucestershire.

The Local Access Forum (GLAF) was set up in 2003 under the Countryside & Rights of Way Act, 2000.  It is a statutory body made up of individuals with particular knowledge and interests in the Countryside.  They hold open meetings three or four times during the year where access issues can be aired with the general public.  The expertise of the Forum is provided to assist the County Council with matters requiring an unbiased and democratic decision.

The countryside is rich in agricultural land and farming has thrived for many generations.  The Cotswolds are a particular magnate to walkers of all ages.  Visitors are encouraged to enjoy quiet leisurely recreation.  That having been said, it is essential that we protect the farming industry from any unnecessary interference.  Public rights of access, whether they be by statutory or ‘permission’, they must be maintained in a ‘safe’ and orderly manner.  The general public are also encouraged to responsibly attend their dogs and to observe the requirements of the ‘Countryside Code’ at all times.

At around 10 am we gathered at the entrance by the cattle pound where several cows and a handsome bull were awaiting their periodic bovine TB tests.  We were met by the very affable Mr Gordon Halling, local farmer (Brockeridge Farm) Chairman of the Commoners Association (Hay Warden).

There were four herds of cattle grazing independently each belonging to local farmers with rights to graze the commons.  These are flood meadows and are mown for hay before the cattle are turned on for free grazing.  Mr Halling pointed out the ancient stone and post markers that indicate the ‘right owned’ areas in the meadow.  These are important indicators when taking the hay cut in the summer. A break is then made to allow the grass to recover and put on some growth.

The Summer Leasow meadow (only usable in Summer) against the bank of the River Avon and flooded over winter, is a haven for wading birds and wildfowl.  The RSPB places restrictions for walkers and public access during the period when winter migrating birds are nesting.  The wintering birds include redshank, curlew, snipe and lapwing.

I was particularly pleased to hear that there is a good skylark population at Twyning as they are diminishing elsewhere.  Mr Halling said he was not too happy with the greatly increasing numbers of Canada geese and felt they no longer require special protection.  The wet areas have a good selection of visitors including dunlin and golden plover.

Mr Halling spoke of the severe problems recently experienced by flooding and over wanton vandalism by some members of the public who do not understand country matters or the problems faced by farmers.  He particularly cited the dogs ‘off lead’ issues and the complete assumption that the meadows were as recreation grounds for the dogs to run free.

Problems at Brockeridge Common were mentioned by Mr Halling who holds grazing rights along with the Lord of the manor.  The lack of intensive grazing has led to an extensive growth of scrub now requiring some urgent attention.  So many of the Commoners sons are now preoccupied with other careers that the commons are in danger of neglect.  He also mentioned the need to pull Ragwort and to cut reeds in danger of proliferating.  The labour required for this type of work is now in short supply.

Our visit took about one hour and was very enjoyable on a pleasant sunny day which was concluded by our hearty thanks to Mr Halling who conducted his talk sufficiently distant from the very busy and noisy motorway that runs (at a height) right through the meadows.

In our discussion concerning the difficulties faced by commoners today. Problems faced by those traditionally rearing sheep has become prohibitive.  Rustling has developed to such an extent that a whole flock can disappear overnight.  The noticeable increase in dog walkers has created a nationwide predicament.  Dogs off lead may rapidly and instinctively maim sheep or lambs.  Several dogs together quickly develop a pack instinct causing uncontrollable damage.  At the very least they create traumatic fear.

Notices posted by farmers requesting ‘dogs be kept on leads’ are destroyed by an irresponsible element of the public.  Recent moves by the CLA and NFU have suggested ‘temporary diversions’ of rights of way during vulnerable lambing periods.  However the Ramblers have voiced disapproval.

The stretch between Brockworth bypass and Cowley roundabout

Three miles of single carriageway traffic has been causing congestion and pollution. With restricted flow and vehicle collisions, considered route changes are essential.

Highways England are the responsible authority for bringing about the necessary changes.  Thirty proposed route options have been assessed.  An allocation of funds has been given of between £250m and £500m. For various practical and landscape impact reasons the thirty options were narrowed to six.  Four of these are greatly disruptive and highly expensive, three of them costing more that £1,200m.  They involved tunnels to prevent impact to the rural surface landscape but include unsightly portals. These would also require lengthy disruptive periods of construction.

A final ‘Option Thirty’ provides a practical proposal, applying surface improvements costing an estimated £485m, would cause least impact on the landscape.  This comprises three lanes from Brockworth bypass to the Air Balloon roundabout and two lanes back.  The PH would be demolished, and the incline lessened.  The rest of the route will allow two carriage ways to and from the Cowley roundabout and onto the A417.

The Cotswold and Gloucestershire Ways, at present restricted by the flow of traffic, could possibly be improved by bridging over new junctions proposed at the Air Balloon roundabout or at Shab Hill.  These may be limited to pedestrian access as a bridle way would require the excessive expense of a ‘cattle’ bridge construction. 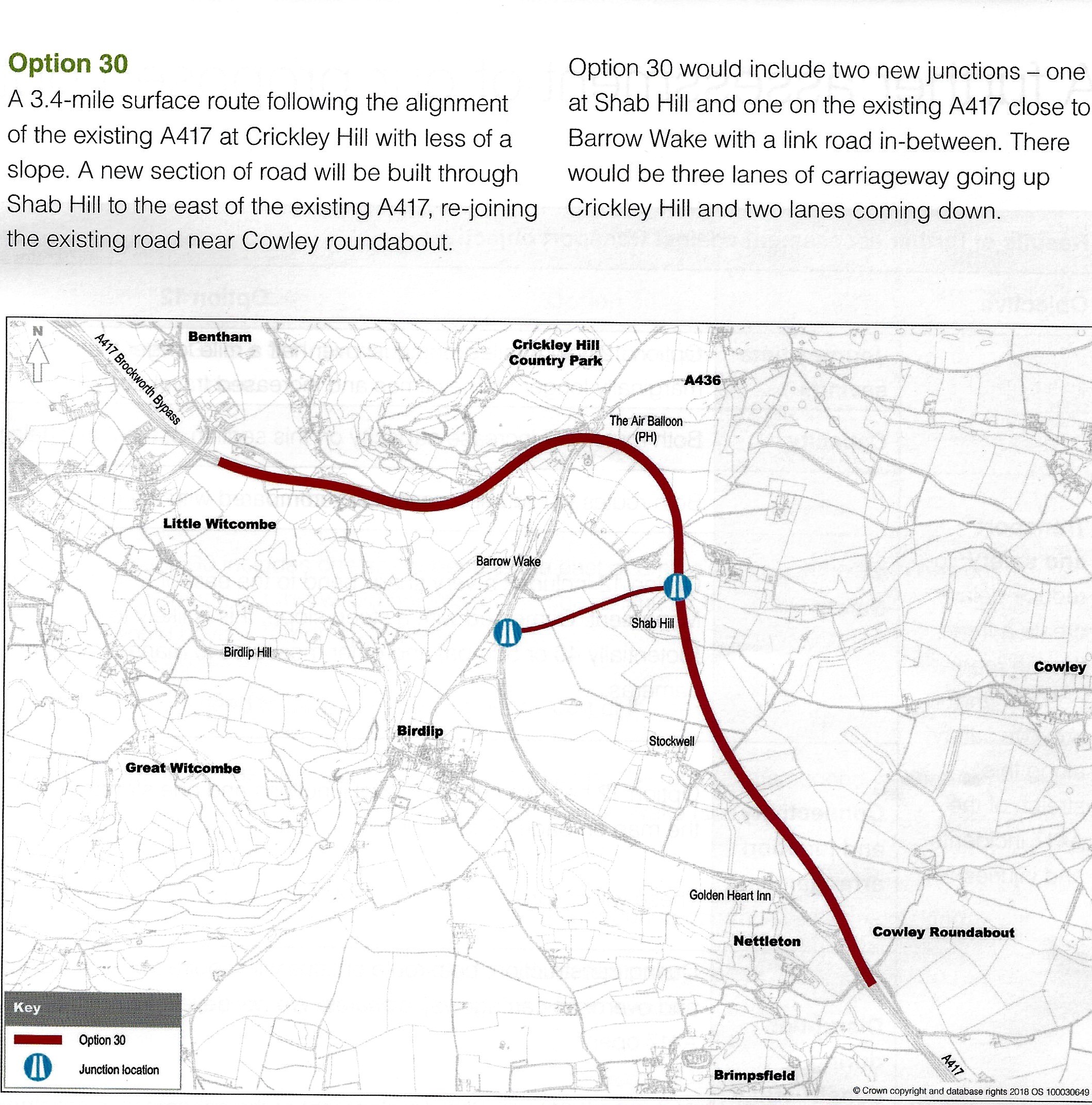 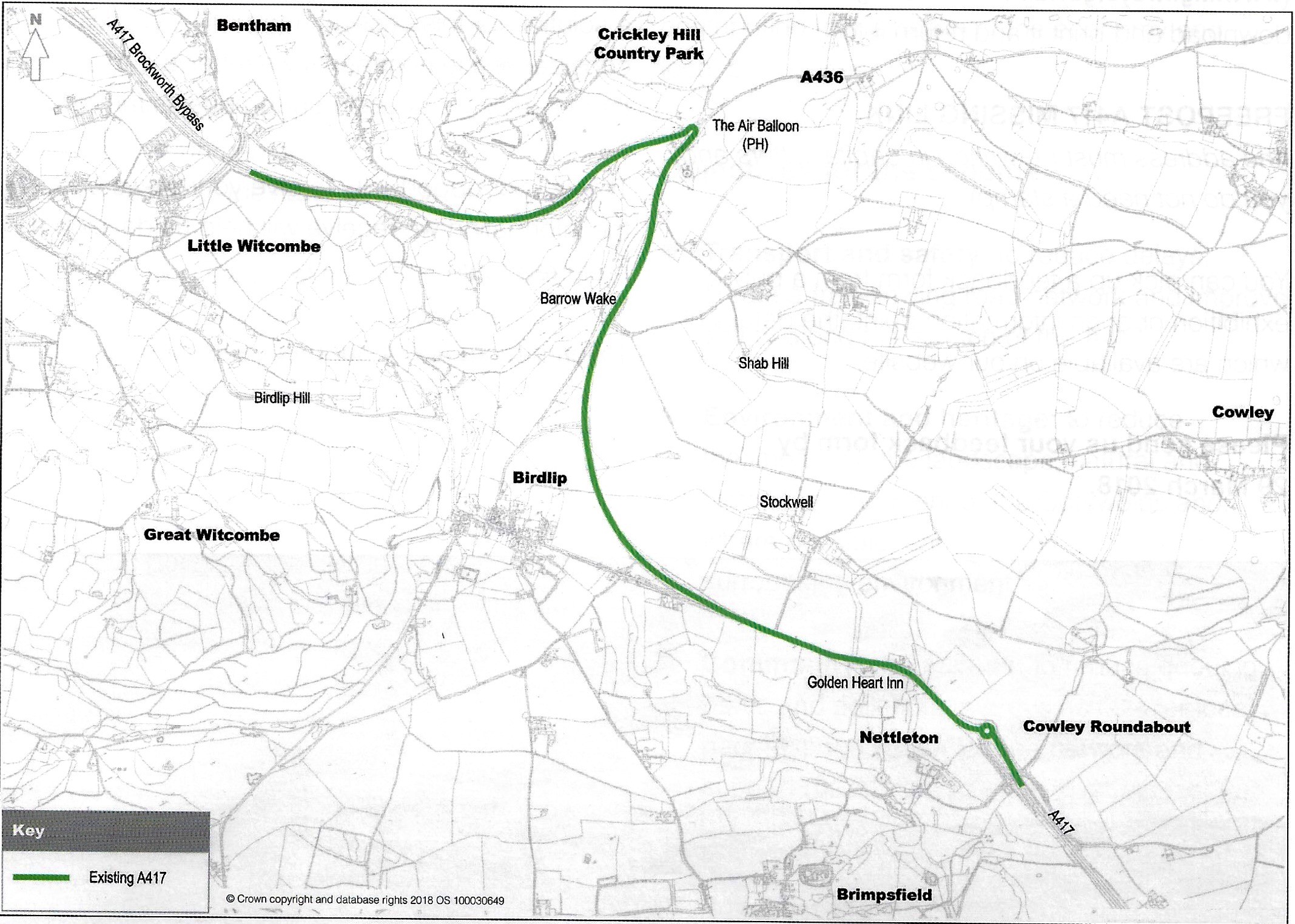 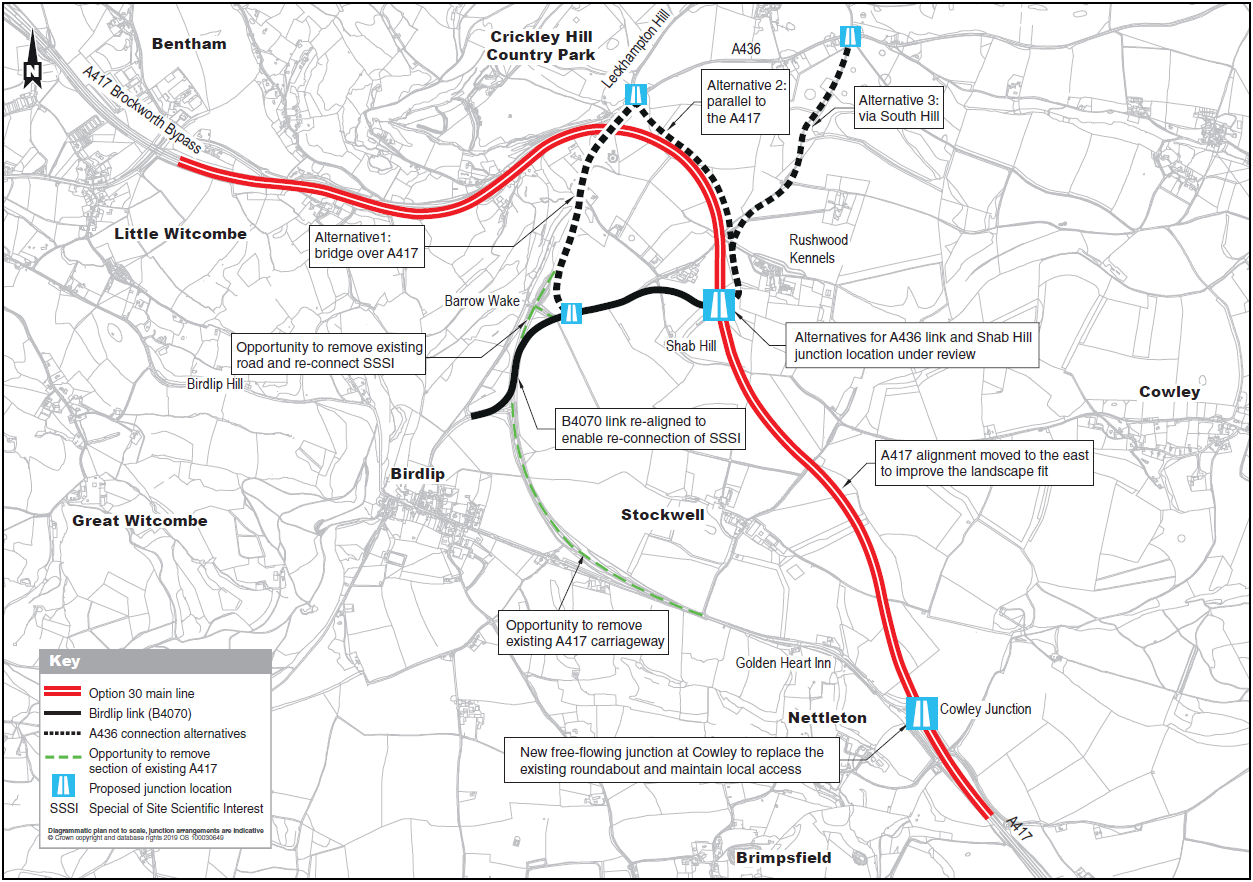