Residence of a medieval burgess in a borough town

The tenure of the burgage formed the basis of ‘free’ unrestricted entitlement within a borough and its environs. Resident burgesses had rights that included the freedom to transact a trade, to erect or hire a market stall, and to graze animals on town common lands. More importantly was the right to vote over local government and possibly to elect two representative MPs to Parliament.

Villainage and burghal systems were the principal foundations of English society. At the core and heart of England’s development is the burgh or borough. Social development may be considered to have begun in the customary self-government of the manorial system. Germs of these institutions may be found in the Celtic age. While the Roman occupation had an undoubted influence on the economic arrangements, it truly developed in the ‘Old English’ period.

The term ‘burg’ in early English had the meaning of ‘association for protection’ and ‘joint responsibility’. Settlements of kindreds began with the Angles, Jutes, and Saxons, who created territories (Mᴂgths or provinces). This led to applications of Folkland and Bookland. Danes and Norwegians came from countries with developed tribal organisations. The early Celtic tribesmen tended to disperse over the land in small family groups, creating hamlets. The new Nordic settlers brought a concentration for the purposes of cultivation and defence.  These were the ‘Old English’ tuns.

The burghality, or planted towns originated from the primary needs of King Alfred to defend against Viking invasions. They were dispersed at twenty-mile intervals to provide protection to their surrounding countryside. Burg then defined these fortified towns held by the Crown or lords of the borough and were subject to rents and services. Rents in the Anglo-Saxon period were called landgable and hawgable. A burg or borough was made up of burgages. These were generally in narrow plots of approximately half an acre with a narrow frontage on to a street. The rents paid to the manorial lord provided and ensured the protection of the citizens.

Burgages typically had a patch of vegetables and stabling to house two beasts (cows or horses, over winter) plus a couple of pigs and a few chickens. In the dry summer season, the beasts were put out to graze on shared ‘common land’. This followed the customary rules of ‘couchancy and levancy’ that controlled numbers on the common to those beasts able to lay down under cover over winter. Stinting (limiting) of numbers of animals was also applied according to the rights of a burgess.

The borough by-laws, regulations and local government in general, were held in a common Moot (discussion) Hall (town hall and guildhall).  Meetings and elections were held on a first floor (court room) and in most cases the town gaol was usually housed on the ground floor. 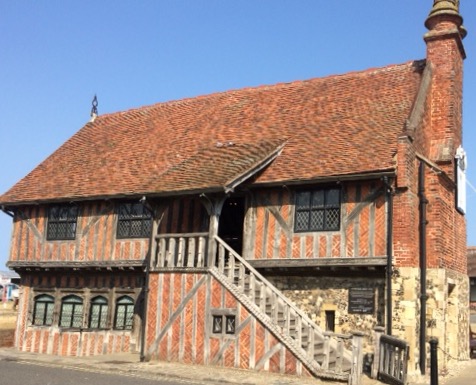 The concept of the ‘planted’ town was initiated by King Alfred’s burghal defence system. This was extended eventually in various ways throughout the British Isles.

In Wales, several Norman towns such as Chepstow and Monmouth were introduced as ‘bastides’. This ‘French’ system was developed further by Edward I following his expeditions in Gascony. Similar developments occurred at Conwy, Denbigh and elsewhere.

The English planted towns in Ulster, were developed in the 1550s. An effort was made to colonise Ireland with ‘English’ (and Scottish) settlers. This involved confiscation of land. Thousands of Cromwell’s Parliamentary soldiers were settled in Ireland. Of course, this changed the demography of Ireland and has resulted in the segregations that still remain today.

In Ireland c1610 Derry had become depopulated and under the ‘scheme’ to repopulate it was renamed Londonderry.  It was so named due to the enterprising input and involvement of the Livery Guilds of London. It was developed as a burgh with imposing defensive walls and they remain fully intact today. To establish their English credentials a Protestant Cathedral was completed in 1633.

Belfast was issued with a Royal Charter in 1613 by King James I to establish its full Town/city status.  It later became the capital of Northern Ireland and the primary seat of government.

Borough: The Old English words burg, burh and byrig are somewhat interchangeable words for what became the current description of a borough town.

Freedoms: The liberties, rights and privileges given under a ‘seignorial’ lord’s charter were limited to the confines of a borough. Whereas, a ‘Royal’ charter would often provide much wider liberties over commerce, free-passage and tolls. It could include access to timber from woodlands, fishing rights, mining or to quarries.

Grazing rights were extensive but most importantly was to be represented in parliament. – This was full freedom. The manorial borough freedom did not extend to ‘Full Corporate Status’. Burgesses were only ‘free’ at specific levels of their functions. Many and most of these privileges were completely reformed by the Municipal Corporations Act 1835, and by subsequent changes in legislation.

Burgages remain as relics in many places and in some there are minor privileges that still remain attached. Such rights have clear origins and similarities as those remaining in regulations over Common Lands.

NB: The ‘Planted’ defensive towns were a socio-political intervention.

Burgess or Freeman, is there a difference?

Manorial rent landgable or hawgable was the tenure required by the lord of the manor = the ‘Scot and Lot (from old Norsk) which was the tax tribute paid by a burgess for their allotment within the borough. It would qualify their rights to vote and to participate in the protection and privileges of the specific borough.

Tallages (specific tribute payments to the lord of the manor)

‘Stallage’ charged for a (portable) market stall or booth.

‘Terrage’ on the use of an established fixed area, booth or shop.

‘Passage’ for tolls over bridges etc.

‘Pontage’ for repair of bridges.

‘Muragh’ or murage for the repair of town walls and or sea defences.

Liberties of the Burgesses (Freemen) within the borough and associated lands may include the right to graze their cattle or horses and fish in the waters of borough commons. Many burgesses who through inherited rights or by gild seniority were ‘scot-free’ in return for their role and duties
performed. Membership of the ‘Gild Merchant’ of the borough was highly prized.