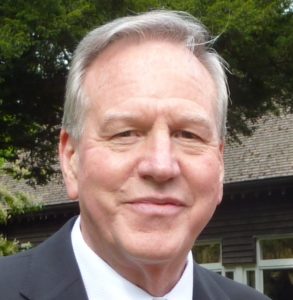 Alan Shelley born 1940, married Kathy Holmes at Harrow in 1967, they have two professional daughters and three grandchildren.  They moved into the Park area of Cheltenham in 1980.  Alan retired from international business in 1995 with the acquisition of the Linotype Co. by the German conglomerate ‘Heidelberg’.  Alan continued in an advisory capacity and as Consultant for FontWorks Ltd based in Old St., London.

His education was broad and varied from boarding at Petersfield and at Plumpton Agricultural College then at Harrow Technical College.  He is a precision engineer (C&G Full Tech.) and a qualified works manager with Cert. in Works Management (pts. 1&2) and Higher Diploma in Industrial Management (IWM).  Prior to starting a career in engineering, Alan spent three months in Denmark studying intensive farming methods, particularly in pig breeding.

As a technical apprentice at the Bell Punch Company (Sumlock Comptometers) Uxbridge, he worked on printing/calculating equipment and early development of OCR.  There followed some years with GEC Electronics Wembley, responsible for staff covering quality control before joining Linotype-Paul Ltd at Kingsbury.  This embryonic company grew exponentially bringing ‘new technology’ to the print industry.  Alan has been involved in the development of several groundbreaking products that are of commonplace today.

Early experimentation involved plastics, printed circuit miniaturisation and clockwork instruments.  Leading to original products that include a first credit card reader for ‘Montague Burton’, the first handheld electronic calculator ‘Anita’ and an independent ‘onboard’ cash/ticket issuing machine for the Copenhagen Bus Co.  Developments in the print world introduced digital vectored ‘Bezier’ curved font characters, keyboard designs for various languages and uses, plus the programming of characters and corrections to inter-character spacing.  Introducing automated composition to Fleet Street/Wapping for the newspaper industry and worldwide.  For more on the development of digital fonts see ‘subject’ Typography.

Before finally retiring in 2005 he also had an 18 hours per week contract with the University of Gloucestershire assisting and advising students in the ‘Learning Centre’.  Additional time was taken up with landscape design, research and matters affecting customary rights and the English traditions of borough towns and the rural countryside.

Involvement in legislation has been something of a family trait, father George H.S (dec.1966) a Marine Underwriter at Lloyd’s of London, was ’claims adjuster’ for Alfred Blackmore & Co., Leadenhall Street.  Brother David (dec.1998) also a qualified marine insurance underwriter was Chief Legislator of Overseas Business at Lloyd’s of London.  Among other duties David was a council member of St. Margaret Pattens the City guild church.

Daughters, Angela an Honours Law graduate (LLB) and Caroline who is an Honour graduate responsible for legal compliance of an international group of companies based in London.

Alan is a Life Member of the Cheltenham Civic Society.  His civic duties in Cheltenham, leaving politics aside, have included membership of Gloucestershire and Cheltenham Chambers of Commerce, the Crime Prevention Panel (for ten years) and the Victim Support Management Committee as a trustee.  He served as a Governor of the Comprehensive School and Sixth Form College (Chairman Admissions) for nine years.  During which time, for two years he was an ‘Advisor of Young Enterprise’ to the Cheltenham Ladies College.

His continuing London connections with the Blacksmiths Company and the Freemen’s Guild also include Life membership of the City Livery Club and London branch membership of the Royal Society of St. George.  Ongoing interests in the world of printing and typography are met by membership of the ‘Wynken de Worde Society’ where meetings are mostly held with lunch, in Stationers’ Hall.