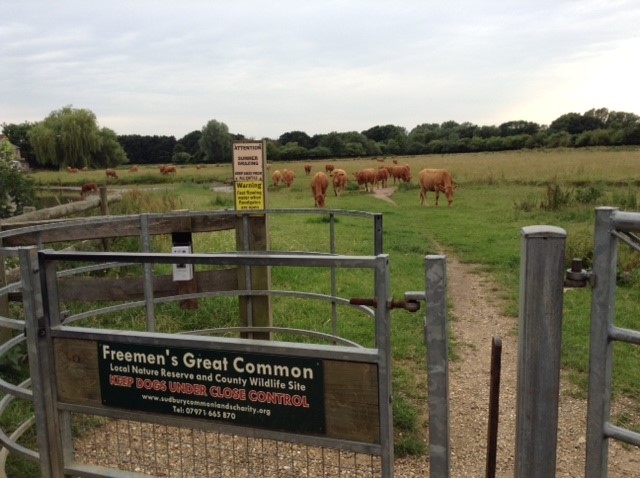 The Norman Conquest confiscated the ancient ‘South-burgh’ manor of Suffolk.  Sudbury passed through the royal family to Robert of Gloucester, the illegitimate son of Henry 1.  The manor then passed down through his son William (along with the Gloucester estates) to William’s daughter Amicia.  She married Richard de Tonebruge (de Clare) 4th Earl of Hertford to become Countess of Gloucester and of Clare.

In the late twelfth century Amicia, Countess of Clare gave rights of pasture (in common) and the right to graze four cows and twenty sheep in Kingsmere and Portsmanscroft.  From that period there follows an unbroken record of grazing up until the present day.  The riverside grazing prone to flooding was permitted to the free citizens of Sudbury.

At some time prior to his death in 1262 Richard de Clare, 6th Earl of Hertford, issued the following which has become known as the ‘First Charter’ (translated):

“Let all present and future generations understand that I, Richard de Clare, Earl of Gloucester and Hertford, have given, granted, and in this present charter confirmed, to my burgesses and the whole community of Sudbury, the whole of my meadow of Portsmanscroft and of Kingsmere in the suburbs of Sudbury towards the north, to be had and held by the said burgesses and their free successors quietly, wholly, rightly, peaceably and by inheritance.  The said burgesses and their successors shall pay annually for this to me and my heirs 40 shillings of silver on the Festival of St.Michael in Acknowledgement of all services, customs and demands.  And I and my heirs will warrant the whole of the said meadow with the appurtenances thereof to the said burgesses and their successors and the whole community forever against all people.  In consideration of the service, gift and grant, and of the ratifying of this charter, the aforesaid burgesses have given 100 shillings by way of fine.  And as my gift, grant and ratification is binding forever both for giver and for the holder, we enforce the present charter with the impression of my seal”.

There were further charters (notably in 1330) confirming the above rights but reserving manorial customs and the ‘right to dig earth in the aforesaid meadow to repair the mill pool as shall be necessary in like manner as we and our ancestors have done before’.  The Sudbury commons then expanded through the eighteenth, nineteenth and early twentieth centuries to their present size (115 acres including Lady’s Island).

In 1897 the Sudbury Common Lands Charity was set up to manage the lands (on behalf of the Freemen of Sudbury).  A continuous and meticulous record of the land management has been kept (for example, in the 20th century: as the clouds of war were gathering one hundred years ago “permission had been granted for the local yeomanry and territorials to drill on specific evenings”).  In 1944 the Freemen Commoners agreed to sell their rights annually to the charity as it became increasingly difficult for them to exercise their grazing rights.  The charity in turn sells the grazing annually.  In accordance with ancient tradition each Freeman (& widow or widower) not taking up their grazing rights receives a share of ‘Common Money’.

Dogs on the Meadow