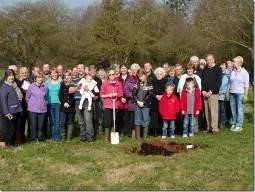 Alan Shelley represents commoners and landowners of common lands in Gloucestershire. He is Hon. Conservator of Highleadon Green in the Forest of Dean. Alan is a freeman commoner with inherited grazing rights over lands at Sudbury, Suffolk. (He is an executive and Trustee of the borough freemen).

An early knowledge of the countryside began with membership of the Middlesex ‘Young Farmers Club’ at Hatch End. In the mid nineteen fifties he studied farm estate management at Plumpton College, East Sussex School of Agriculture. Alan has a degree in Landscape Architecture, is a member of the Open Spaces Society and a Life Member of the National Trust.

For more than 25 years Alan has been involved in protection, conservation and registration of Town Commons for the national boroughs association, Freemen of England & Wales (Deputy President 1990-5). This has included moorlands, strays, pastures and meadows, including Oxford’s ancient
‘Port Meadow’, as well as the Sudbury Common Lands.

In 1999-2000 Alan studied Countryside Recreation and the issues surrounding a ‘Right to Roam’ for a Post Graduate Diploma under the tutelage of Prof. Nigel Curry, who was involved in the formulating of the CRoW Act (2000). Alan joined the newly formed Gloucestershire Access Forum set up in 2003, representing the Commons Landowners and the Right holders.

Overgrown common land at Highleadon, without a registered owner, had been abandoned for more than 50 years. Alan was approached by the Parish Clerk for assistance to manage the land. For his actions in putting together a formal proposal and employing little used Commons Law, Alan was appointed Hon. Conservator for life of the voluntary group ‘Highleadon Green Association’.

See Freemen of England & Wales: Viewpoints from the Officer Without Portfolio

Protecting unique rights and intellectual property has been a major theme of Alan’s working life. As Manager and head of Typographic Services of the Linotype Co. in the UK, he was responsible for type design, font production, royalties and sales. He was a member of the Manufacturing Committee of the Association Typographique Internationale ATypI, protecting type technology.

As a member of the executive council of the Society of Typographic Designers STD, he was involved with the policies and national student examinations of type design and typography. Alan was a member of the national ‘Federation Against Software Theft’ FAST and responsible for copyright and trademark protection. As an ‘expert witness’ at the Patents Court of the High Court of Justice, Alan has defended the rights and proved injustice. In retirement he has been a direct adviser, including, on several occasions to Microsoft head offices, Redmond Washington, USA.